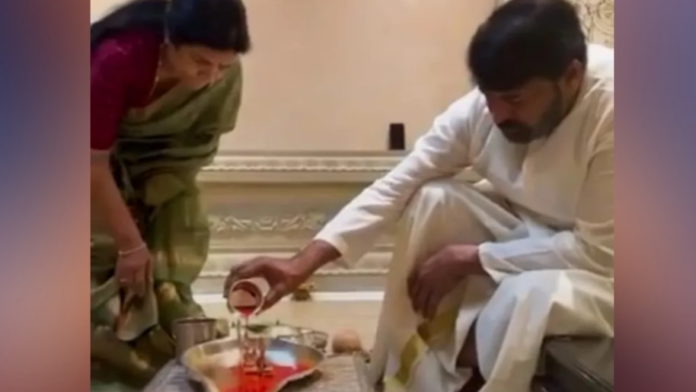 On the auspicious occasion of Ram Navami, Megastar Chiranjeevi performed pooja and offered prayers to Lord Shri Ram at his home on Sunday. He was accompanied by his wife Surekha Konidala.

Ram Navami is the appearance day of Lord Ram, born to King Dasharatha and Queen Kausalya in Ayodhya, Kosala in Treta Yug.

The actor took to Instagram and dropped a glimpse of the rituals performed today with a note, “Rama Navami wishes to all! #happysriramanavam”.

On the work front, Chiranjeevi will be next seen in ‘Godfather’, the remake of the Malayalam movie, Lucifer. The film is directed by Mohan Raja and bankrolled by Konidela Production Company and Super Good Films. Lady superstar Nayanthara is paired with Chiranjeevi alongside Satyadev Kancharana in an important role.

On the other hand, Chiranjeevi will also play the lead in Koratala Siva’s action thriller, Acharya. Produced by Matinee Entertainment, the film stars Ram Charan, Kajal Aggarwal, and Pooja Hegde in the lead.