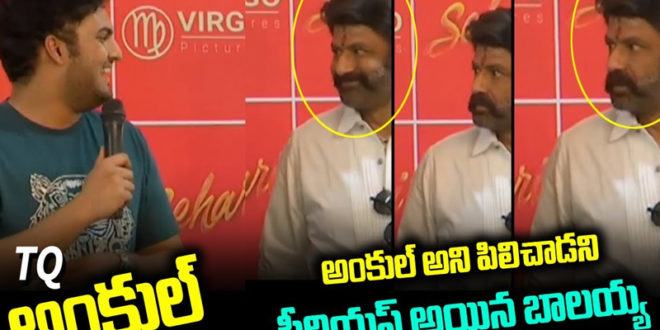 Telugu superstar Nandamuri Balakrishna has been invited as a guest by the team members of Sehari Cinema. Balakrishna was the chief guest at the release of the first look poster of the film. The problems started when the young actor in the film addressed him as ‘Uncle’ during the function.

Balakrishna’s expression changed when he heard ‘Uncle’. The actor immediately changed his name to ‘Sorry Sir, Balakrishna’. But later Balakrishna was restless throughout the ceremony. Meanwhile, he gets a phone call, he immediately pulled out of his pocket and throws away. The video also shows the actor shaking hands with himself while releasing the First Look poster.

The actor was at home, away from the shooting rush during the Kovid crisis. He appeared in public eight months later.  Sehari is a Gangasagar directed film starring Harsh and Simran Chowdhury in the lead roles.