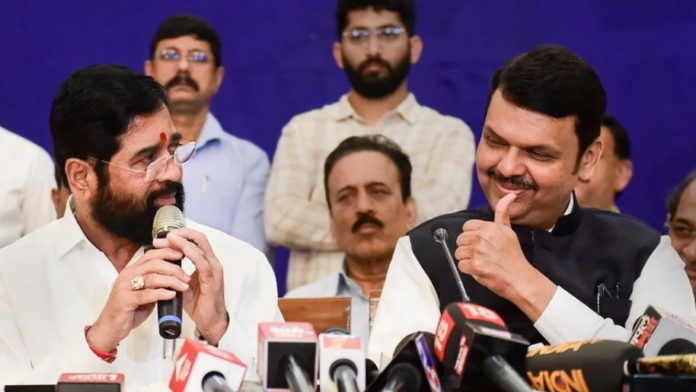 In a big political move, Shiv Sena rebel Eknath Shinde took oath as Maharashtra Chief Minister and Devendra Fadnavis his deputy on Thursday. The development came as the biggest surprise element out of this political crisis when everyone was hoping that Devendra Fadnavis will be sworn in as CM.

He was administered an oath by Governor Bhagat Singh Koshiyari at the Raj Bhavan in Mumbai.

Shinde thanked Fadnavis saying, “BJP has 120 MLAs but despite that Devendra Fadnavis didn’t take the post of CM. I express my gratitude to him along with PM Modi, Amit Shah & other BJP leaders that they showed generosity and made Balasaheb’s Sainik (party-worker) the CM of the state.”

Uddhav Thackeray quit as Maharashtra Chief Minister yesterday, shortly after the Supreme Court ruled that he must prove his majority.

The 2.5 year (approx 31 months) tenure of the Maha Vikas Aghadi (MVA) government collapsed after over 40 MLAs mostly of Shiv Sena and independents rebelled against the coalition government.

Earlier in the day, Eknath Shinde, who arrived in Mumbai from Goa, met Fadnavis at the latter’s official residence in south Mumbai to discuss formation of the next government in Maharashtra following the collapse of the MVA dispensation a day ago.