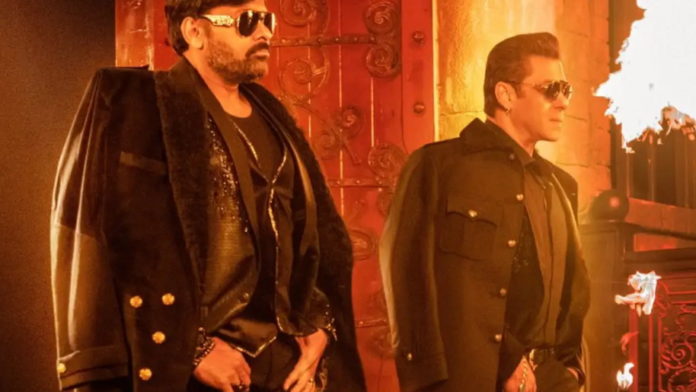 The makers of Chiranjeevi’s GodFather unveiled the first track from the forthcoming political drama a couple of days ago and now they have released the lyrical video of the single named Thaar Maar Thakkar Maar.

The song features superstars Chiranjeevi and Salman Khan rocking the dance floor. Both make for a stylish duo as they twin in all-black attires with leather pants and shimmery black blazers.

S Thaman has rendered the music for this much-discussed action entertainer. Choreographed by Prabhu Deva, the number features Chiranjeevi making a stylish entry with his hand on his face. Later we see Salman Khan entering while biting his nails. Penned by Anantha Sriram, the song is sung by Shreya Ghoshal.

Mohan Raja has directed GodFather, which is an official Telugu remake of the Malayalam movie Lucifer, with Mohanlal as the leading man. Backed by RB Choudary and NV Prasad, Chiranjeevi’s banner Konidela Surekha is presenting the film. Lady Superstar Nayanthara, director Puri Jagannadh and Satya Dev will also be seen playing notable roles in the drama, apart from the rest.