Home Social What is LGBTQ ? meaning and full form
Social

What is LGBTQ ? meaning and full form 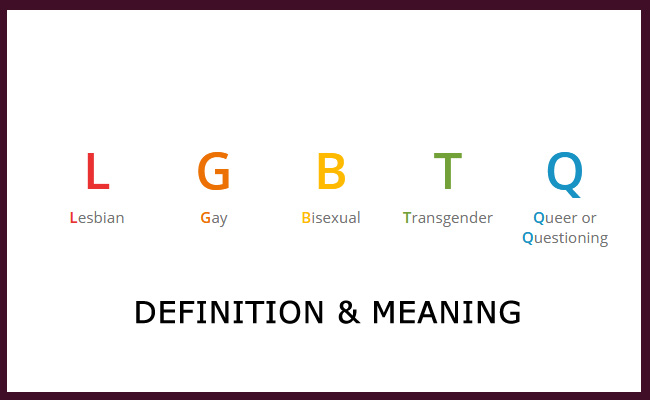 What is LGBTQ ? the abbreviation LGBTQ is viral at the social networks in India after the supreme court verdict today. The full form and meaning of the word LGBTQ is given below.

The term LGBTQ is often used to call all the communities included in ‘LGBTTTQQIAA’, which in detail is given below.

As it is hard to pronounce the term LGBTTTQQIAA, people used ‘LGBTQ’ as it is more user friendly.

The communities and definition is given below:

Lesbian:
A lesbian is a female homosexual: a female who experiences romantic love or sexual attraction to other females.

Gay:
Gay is a term that primarily refers to a homosexual person or the trait of being homosexual. Gay is often used to describe homosexual males but lesbians may also be referred to as gay.

Transgender:
Transgender is an umbrella term for people whose gender identity differs from what is typically associated with the sex they were assigned at birth. It is sometimes abbreviated to trans.

Transsexual:
experience a gender identity inconsistent or not culturally associated with the sex they were assigned at birth.

Two-Spirit:
Two-Spirit is a modern umbrella term used by some indigenous North Americans to describe gender-variant individuals in their communities, specifically people within indigenous communities who are seen as having both male and female spirits within them.

Queer:
Queer is an umbrella term for sexual and gender minorities that are not heterosexual or cisgender. Queer was originally used pejoratively against those with same-sex desires but, beginning in the late-1980s, queer scholars and activists began to reclaim the word.

Questioning:
The questioning of one’s gender, sexual identity, sexual orientation, or all three is a process of exploration by people who may be unsure, still exploring, and concerned about applying a social label to themselves for various reasons.

Intersex:
Intersex is a variation in sex characteristics including chromosomes, gonads, or genitals that do not allow an individual to be distinctly identified as male or female.

Asexual:
Asexuality (or nonsexuality) is the lack of sexual attraction to anyone, or low or absent interest in sexual activity. It may be considered the lack of a sexual orientation, or one of the variations thereof, alongside heterosexuality, homosexuality, and bisexuality.

Ally:
An Ally is a person who considers themselves a friend to the LGBTQ+ community.

Pansexual:
Pansexuality, or omnisexuality, is sexual attraction, romantic love, or emotional attraction toward people of any sex or gender identity. Pansexual people may refer to themselves as gender-blind, asserting that gender and sex are insignificant or irrelevant in determining whether they will be sexually attracted to others.

Agender:
Agender people, also called genderless, genderfree, non-gendered, or ungendered people are those who identify as having no gender or being without any gender identity. This category includes a very broad range of identities which do not conform to traditional gender norms.

Gender Queer:
Gender Queer is an umbrella term for gender identities that are not exclusively masculine or feminine—identities which are thus outside of the gender binary and cisnormativity.

Pangender:
Pangender people are those who feel they identify as all genders. The term has a great deal of overlap with gender queer. Because of its all-encompassing nature, presentation and pronoun usage varies between different people who identify as pangender.

Chennai: Tamil superstar Vijay's picture taken with his fans has gone viral. The BJP's protests against the star continue to go viral within minutes of...
Read more
Film News

Corona; Jackie offering a huge amount of money for those who find the cure

Corona virus threat began from vuhan at first and then it spred to many countries. There are over 400,000 people from all countries. What...
Read more
News

Directed by actor Dileep's brother Anoop, the film was titled "Thatthassery Kuttam". The movie is produced by Dileep under the banner of Grand Productions. The...
Read more
- Advertisment -