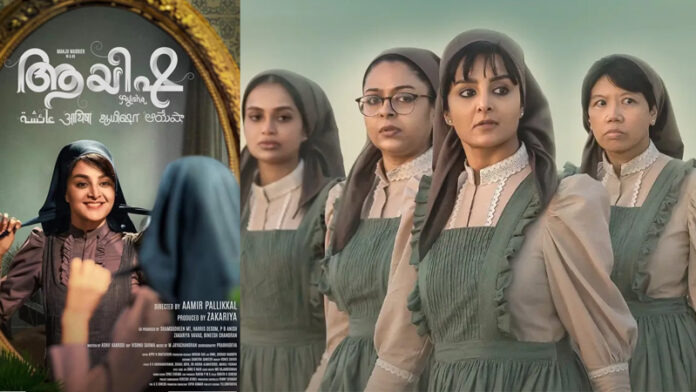 Ayisha is a Malayalam movie directed by Amir pallikal. The film which hit the theatres today has Manju Warrier in the lead role. Manju Warrier portrays the character of Ayesha. There have been many Malayalam films that talk about the gadhamaas from Kerala who later went to Arab countries. But most of these films were either too dramatic or unevenly emotional. Gadhama, Malayalam film starring Kavya Madhavan also had similar story premises. But Manju Warrier’s Ayesha is completely different from all the films which we have already seen.

Ayesha is a woman who reaches Riyadh as a gaddhama. She is appointed to a royal family in Riyadh. She meets an older woman in the royal family who everyone calls mamma. The emotional bonding between Aisha and mamma is the primary plot that drives the film. Royal family characters are always shown in a negative light in Malayalam films. They are either portrayed as insensitive, foolish, or cruel at times. But in this movie, they are portrayed with all kinds of human emotions. This is something that needs to be appreciated.

The film is universal in not just its making, but in the theme that the film puts forward. The film showcases that you cannot claim a film to be universal just by showcasing many tall buildings and insane fight visuals. To appease a universal audience, what you need to first have is a story that appeals to every human being, something to which every person can relate personally and emotionally. This is where Ayesha wins the game.

People take a different routes, but most of them wish for the ultimate goal of equality – this is the primary theme of this story. The biggest positive of this film is the performance of lady superstar Manju Warrier. Most of the characters she is portraying recently or having the flavors of a typical warrier character. But Manju is in a complete makeover in this film. Not just in the way she acts like Aisha, but also in the way she dances and charms on the screen. It is a delight to watch Radhika on screen after many years. Aisha is a good pick for families to watch this weekend.