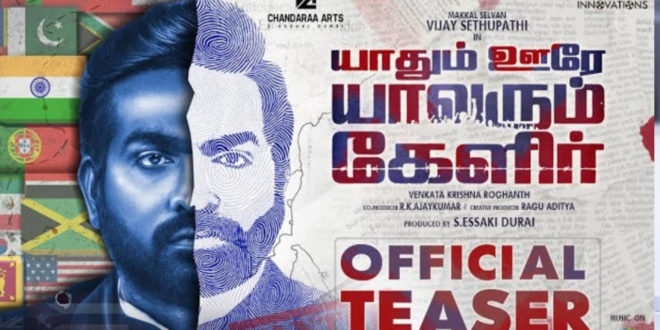 Vijay Sethupathi has released the first official teaser of his ‘Yaadhum Oore Yaavarum Kelir’. The teaser, which runs into 1 minute 30 seconds, is filled with drama, action, and suspense. Netizens have given thumbs up for the teaser from this Venkata Krishna Roghanth directorial. The movie features Megha Akash, Magizh Thirumeni, Vivek, Kaniha, and to name the rest in important roles.

The credit for the title, ‘Yaadhum Oore Yaavarum Kelir’, goes to the ancient philosopher, Kaniyan Pungundranar. The character essayed by Vijay Sethupathi appears to have a sense of mystery associated with him. Multiple characters, though they seem to know him very well, have seen questioning his identity – might be suggesting the inner and outer dilemma, and a sort of identity crisis faced by the central character. This S Essaki Durai production venture is heading towards hitting big screens soon this year.