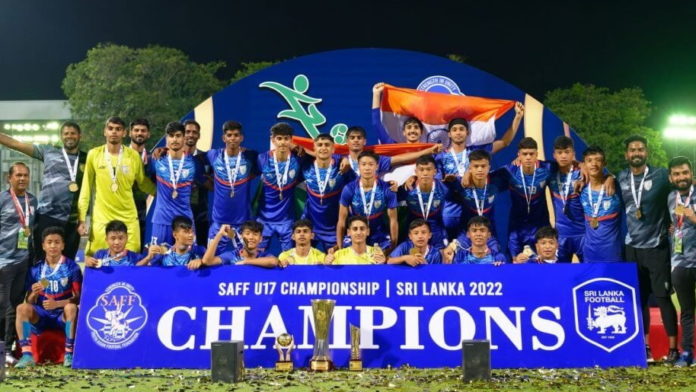 The Indian football team outplayed and dominated Nepal to clinch the SAFF U-17 Championships title. The match was played in Colombo on Wednesday, defeating Nepal by a margin of 4-0. Courtesy of one goal each by Boby Singh, Korou Singh, captain Vanlalpeka Guite, and Aman, India was able to defeat Nepal.

Before this Nepal had defeated India by a margin of 3-1 in the league stage of the tournament.

However, in the final, India looked a side eager take complete charge of the proceedings right from the word go. They got off the blocks early in the match, looking to find the gaps in the Nepal defence, and managed to get the lead in the 18th minute through Boby, who headed it into the goal at the far post, after a good piece of play between Ricky Meetei and Vanlalpeka Guite, as the latter sailed a cross towards the eventual goalscorer.

Guite was in the thick of things again 12 minutes later, getting another assist to his name, as he played a through ball to Korou Singh, who just had to round the keeper and slot it home.

Head Coach Bibiano Fernandes hailed the effort of his boys. “I am extremely proud of my boys,” he stated moments after India’s victory. “There has been a lot of hard work put in, and every support staff, and player deserves equal credit,” he added. “The efforts put in by AIFF at the youth level by providing us continuous exposure tours with help from SAI has helped the boys mature.”