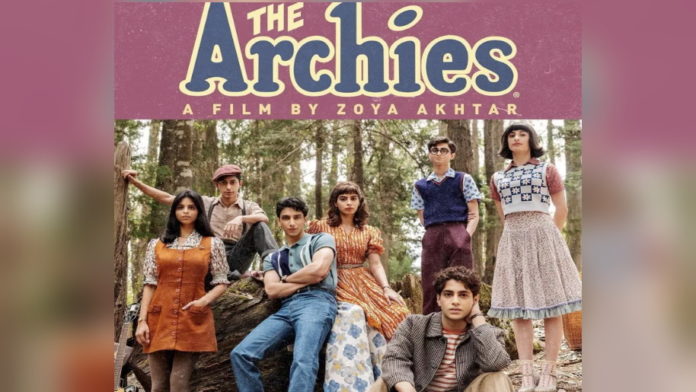 Ever since the buzz about about Shah Rukh Khan’s daughter Suhana Khan, late actress Sridevi’s daughter Khushi Kapoor and Amitabh Bachchan’s grandson Agastya Nanda’s much-awaited debut in The Archies, Zoya Akhtar has finally unveiled the first look of the film.

Suhana Khan will essay the role of Veronica, Khushi as Betty and Agastya Nanda as Archies.

Along with the first look, the teaser of The Archies was also unveiled on social media. “Get ready to take a trip down memory lane ’cause The Archies is coming soon only on @netflix_in,” wrote Akhtar.

Sharing the teaser, Zoya added: “Ain’t nothing like old school. Grab your gang ’cause the Archies are coming soon on @netflix_in !”

Grab your picnic baskets and pick out your cutest outfits, we're going to greet the Archie’s gang!
Presenting the cast of THE ARCHIES, a Zoya Akhtar film. pic.twitter.com/EcDrSIjvnR

The sun is out, the news is out! Come meet your new friends.
Presenting to you the cast of The Archies, directed by the fantastic Zoya Akhtar. pic.twitter.com/vOtm29V0gP

Set in the 1960s, the film adaptation of the popular Archie comics, and will be produced by Zoya Akhtar and Reema Kagti for Tiger Baby and Sharad Devarajan for Graphic India. It is written by Kagti, Akhtar and Ayesha DeVitre. The Archies will stream on Netflix in 2023.