Santosh Trophy: Kerala storms into final with 7-3 win over Karnataka 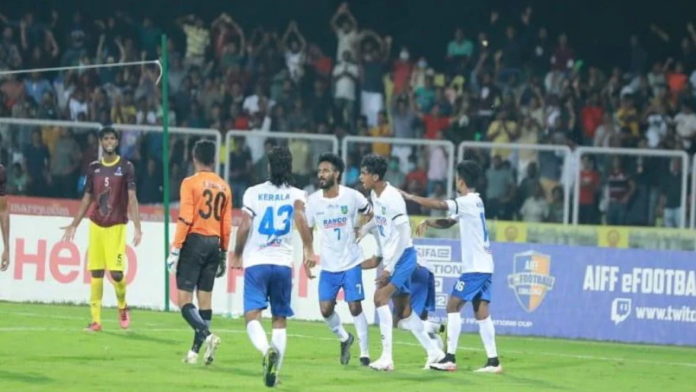 Kerala had a super win in the semi-final match of the Santosh Trophy to enter the finals today. The credit for the exemplary win goes to Jesin TK, who scored five goals against Karnataka. The match took place at Payyanad Stadium in Manjeri, Malappuram.

Karnataka scored the opening goal, only for Kerala to bounce back later to come out victorious. Jesin(35,42,44,56,75), who came on as a super-sub, completed his hat-trick in the first half before scoring twice in the second half.

74' GOAL!!! Jesin makes it 5️⃣ for himself and it is a five star 🌟 performance from the substitute. Through ball from Noufal, Jesin runs onto it and calmly slots it away

Karnataka gave Kerala a scare, taking the lead in the 25th minute through Sudheer Kotikela, off a superb square pass into the goal area from N. Solaimalai.

Jesin found the equaliser just ten minutes later for Kerala, as he beat Karnataka’s advancing goalkeeper Kevin Koshy with a neatly angled shot after receiving an excellent long ball from Muhammad Rashid into the box.

Jesin then struck twice inside the next 10 minutes. An injury-time goal from Shighil made the scoreline 4-1 at half-time.

In the final to be played on May 2, Kerala will take on the winner of Friday’s semifinal between Bengal and Manipur.

Santosh Trophy this year goes to Kerala; The seventh one!!