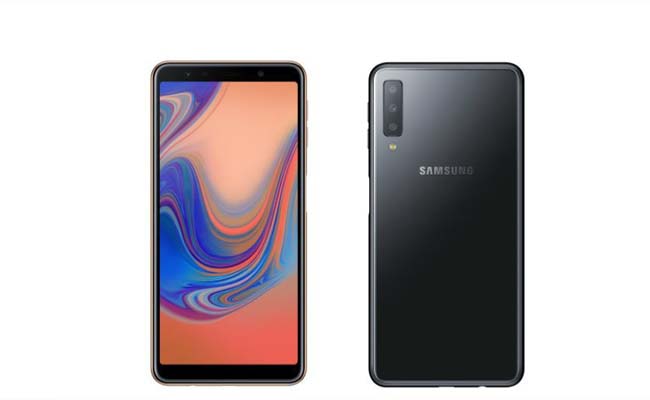 The smartphone is slated to be available in over 180,000 outlets by September-end. It will be available on September 27 and 28 during a special preview sale on Flipkart, Samsung e-shop and at Samsung Opera House in Bengaluru.

“We are expecting to disrupt the market and gain significant share specifically in our ‘A Series’. So this is the first triple camera phone that we are bringing to the market which we have not even launched in our flagship segment but the whole idea is to really expand this series,” Mohandeep Singh, Senior Vice President, Mobile Business, Samsung India told IANS.

The Galaxy A7 sports 24MP main + 5MP live focus + 8MP ultra-wide sensors at the rear and a 24 MP selfie shooter.

It has a 2.5D glass back design, 7.5-mm body and a side fingerprint sensor which has been integrated into the power button itself.

“The new colours and a side fingerprint sensor deliver a refreshed design. We are confident that with this device, we will capture the imagination of the Indian millennial and be able to add to the celebrations during the festive season,” said Sumit Walia, Director, Mobile Business, Samsung India.

Galaxy A7 is powered by a Samsung’s proprietary Exynos 7885 2.2GHz octa-core processor.

The device will be available in 6GB RAM+128GB storage and 4GB RAM+64GB storage configurations.

The smartphone is powered by a 3300mAh battery and runs Android Oreo operating system (OS).

Samsung is offering cash back worth Rs 2,000 on the smartphone when buyers make payment through HDFC bank credit and debit cards.

In the world of smartphones, we’ve reached a point where it’s no longer necessary to spend absurd amounts of money to get some pretty...
Read more
Mobile & Accessories News

Apple and Google are not ready for it, though everyone will be releasing big cameras in 2019 because you know what?

Most of the mobile companies are in the process of releasing cameras capable of providing great photos with high megapixels. However, there are two...
Read more
Mobile & Accessories News

Earlier this month, HMD Global unveiled its budget smartphone - the Nokia 2.3 - at an event in Cairo. And now the phone has...
Read more
- Advertisment -