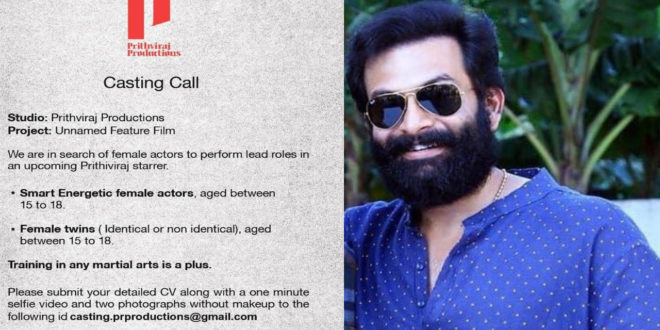 Prithviraj is looking for fresh faces for one of his upcoming films. Taking social media spaces, the star maintained that an unnamed feature film under the banner of ‘Prithviraj Productions’ was looking for female artists in two categories. According to the casting call, posted by Prithviraj, the movie would require female artists, aged between 15 and 18. The production house looks female twins in the above mentioned age group; they also expect the female actors to be smart and energetic. Interestingly, professional training in any martial arts would be treated as a plus by the production house.

The movie will star Prithviraj in the lead role, while the rest of the details are not known. As was mentioned in the casting call, acting aspirants meeting the above mentioned criteria, can send a detailed CV along with a one minute selfie video and two photographs without make-ups to the following id: casting.prproductions@gmail.com.