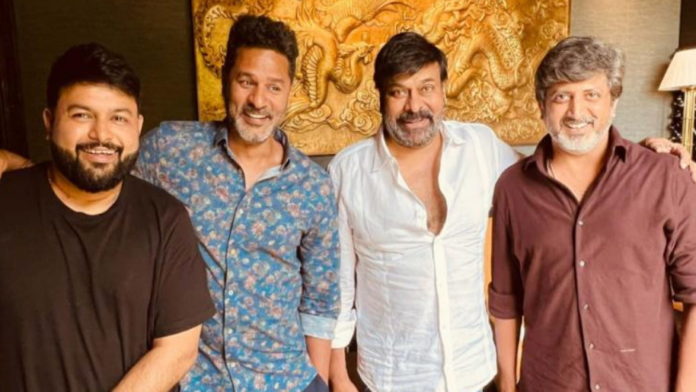 ‘Godfather’, the highly anticipated film starring Megastar Chiranjeevi and directed by Mohan Raja is being produced on a grand scale by Konidela Production Company and Super Good Films. It will also feature Bollywood superstar Salman Khan in a pivotal role.

According to latest reports, the team had planned a sizzling song for Chiranjeevi and Salman Khan. Prabhu Deva will choreograph this special dance number, and S. Thaman will compose the music.

Thaman, took to his social media handles, and shared a picture of himself with Megastar Chiranjeevi, Prabhu Deva, Mohan Raja, and others.

“Yayyyy!! THIS IS NEWS. Prabhu Deva Will Be Choreographing An Atom Bombing Swinging Song For Our Boss Chiranjeevi and Salman Khan Gaaru What A High Seriously @jayam_mohanraja Our Mighty #GodfatherMusic #Godfather This is GONNA LIT ATHE Screens For Sure”, Thaman’s post reads.

This is GONNA LIT 🔥 THE Screens For Sure 😍 pic.twitter.com/H618OaI9b6

Godfather is the remake of Malayalam super hit ‘Lucifer’ and the film is nearing the end of its production. Nayanthara will have a significant role, and Puri Jagannadh will appear in a cameo. Satya Dev also has a full-length role in the film. The supporting cast includes Harish Uthaman, Sachin Khedekar, Nassar and others.