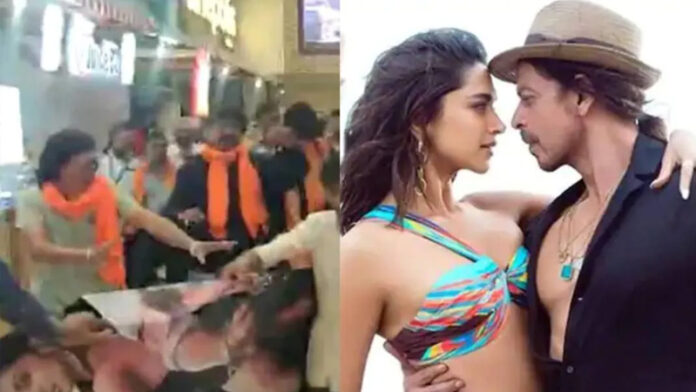 After the cut-outs of Deepika Padukone and Shah Rukh Khan were placed as part of the promotion of the movie ‘Pathan’, footage of a mob attacking and destroying the Alphavan Mall in Ahmedabad is coming out. National media reports that Bajraj Dal activists are behind this and they have destroyed the cutouts of Shahrukh and Deepika. It is reported that they have warned not to release the film.

‘Pathan’ is a film that is noted as the film where Shahrukh is coming as the hero after a long gap. But with the release of the song Besharam Rang from the film, calls for a Pathan boycott intensified. The saffron bikini worn by Deepika in the song was the source of controversy. Criticisms and threats against Shah Rukh and the film are coming every day.

A controversial monk named Paramahans Acharya of Ayodhya had threatened to burn Shah Rukh Khan alive if he saw him. Symbolically, the star’s posthumous rites were also performed. He alleged that Shahrukh Khan insulted the color saffron.

Hanuman Garhi priest Mahand Raju Das called for burning theaters releasing ‘Pathan’. Bollywood and Hollywood always try to make fun of Sanatana religion. The way Deepika Padukone used saffron as a bikini makes us sick. He calls for a boycott of the film. Burn the theaters where the movie is showing, otherwise they won’t understand, he said, you have to be ready to face evil.

‘Pathan’ will release on January 25, 2023. The action thriller film is directed by Siddharth Anand. John Abraham is also playing the lead role in the film. The movie also stars Dimple Kapadia, Shaji Chaudhary, Gautham, Ashutosh Rana and others. Apart from Hindi, Pathan will also hit the theaters in Tamil and Telugu versions.