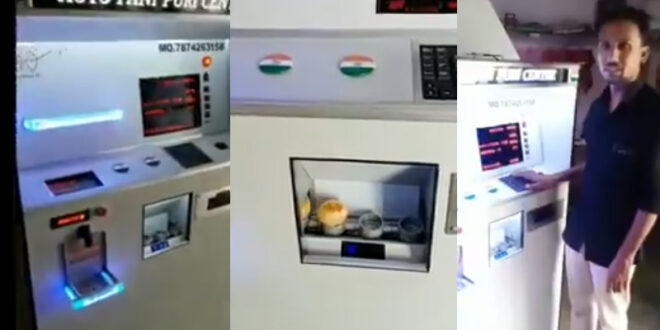 Panipuri ATM machine in Gujarat is viral on social media

Golgappa or Panipuri is a sentiment for many in our country, not just filling the belly at an affordable price. Tastes might be slightly different but Panipuri can be found at Tourist places throughout the country. There are many workers in our country who were hungry just for a drink. With the lockdown, most of the time it stopped. While many are experimenting with homemade drinks. With the help of technology, new methods have already been invented to get the food into the hands of those who need it without much effort. This video, shared by Assam Police ADGP Hardy Singh, has now gone viral. This video of the ‘Panipuri ATM’ machine has already become a super hit on social media!

Now this is real Indian ingenuity!

Call it by any name Gol Gappe, Puchka, Batasa – we love it! pic.twitter.com/wC288b9uUD

In the video you can see the price of the panipuri on the screen and put Rs 20 note on the machine as shown. Moments later, the vending machine opens underneath the keyboard and through a conveyor belt panipuri will be delivered to the customer. Reports say it took six months to design the machine, called the ‘Auto Panipuri Center’. The man behind the contactless Panipuri vending machine is from Banaskantha, Gujarat whose identity is undisclosed. It is expected that this machine will deliver more and more places soon, avoiding contact with people.