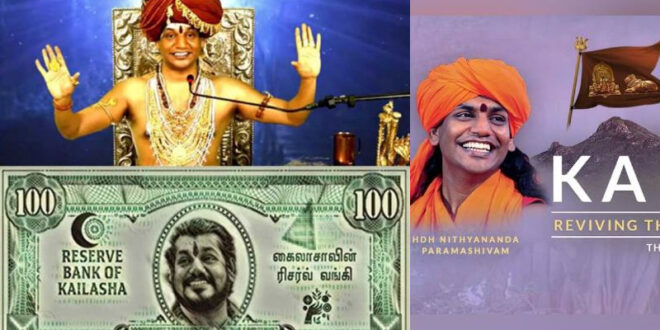 Controversial deity Nityananda, who has crossed over from India, will make the announcement on Saturday about the new bank he has set up in his home country of Kailasa. According to social media, Nithyananda himself has set up a bank in Kailash called the Reserve Bank of Kailasa. Nithyananda had said three days ago that the new currency would be launched on Ganesh Chaturthi and more details about the bank would be revealed. Nithyananda claims that all financial transactions in Kailash, including currency exchange, are legal.

Nithyananda drowned in India after being involved in a case of imprisonment and torture of girls. He then claimed to have established his own country by the end of last year. Initial reports said that Nityananda’s country was on an island in Ecuador. But Ecuador’s response was that Nityananda was not in their country. With this, there were reports that Nityananda Kailash had declared an island in Trinidad and Tobago.