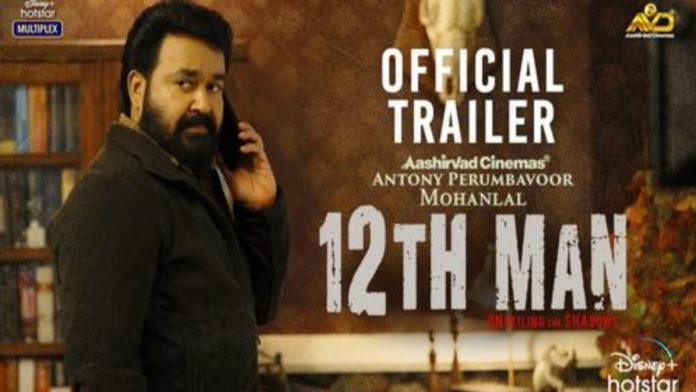 After the success of Drishyam 2, Jeethu Joseph is back with yet another thriller suspense film titled, ’12th Man’, starring superstar Mohanlal in the title role. The trailer of ’12th Man’ was unveiled by Mohanlal, through his official Facebook page.

The actor also announced that the film will release on May 20 on Disney Plus Hotstar.

The trailer gives a glimpse of college friends, who have joined together for a celebration. Meanwhile, Mohanlal, who is drunk, joins them as the 12th Man. But one night just changes whole atmosphere of their party. The trailer is enthralling for the audience which gives the usual Jeethu Joseph’s thriller taste.

’12th Man’, is a mystery thriller film, where twelve strangers from different walks of life are invited by an unknown host to attend a private party at a solitary bungalow remotely off the city limits. The screenplay was written by K. R. Krishna Kumar.