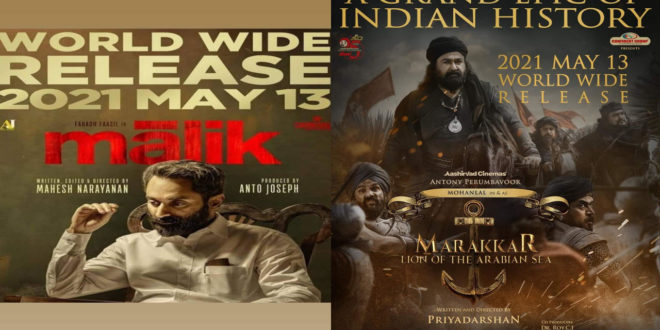 Last day, Fahadh Faasil starrer ‘Malik’ announced the release date on May 13th. Definitely, one of the most anticipated projects of recent times in Malayalam cinema, the release date of ‘Malik’, however has coincided with that of ‘Marakkar’. The latter, being touted as one of the most expensive films ever made in Malayalam cinema, and riding high on hopes with superstar Mohanlal in the lead role, had announced the release date couple of days ago. While, the industry must be cheering for the business slowly getting back to full throttle, a section is wondering whether it’s too early for a clash.

Having said that, Covid is still here and the industry is yet to wake up from the struggling days. Albeit the demands raised by the industry people, the government hasn’t given sanctions for the industry to be fully operational. With vaccination progressing in full swing, it might be assumed that in three months – that is by May, restrictions on film industry be lifted. Now, the makers of both ‘Marakkar’ and ‘Malik’ might have calculated this and proceeded with releasing plans. If everything works according to the plans, then the month of May would mark the upward trajectory of the film industry – powered by these two biggies.