Kia Sonet to be Launched With Clutchless Manual Transmission 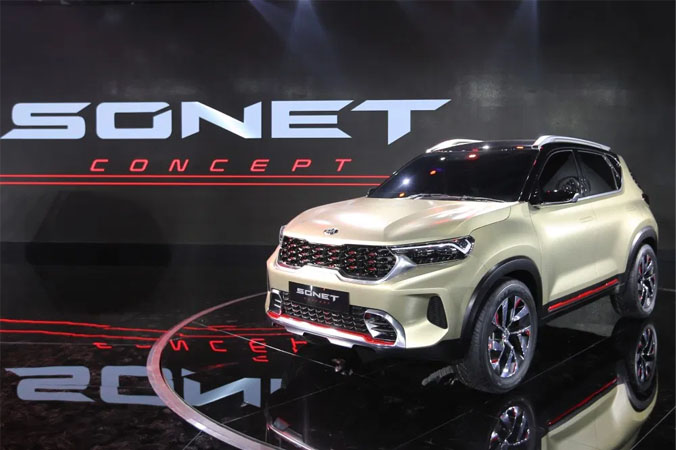 Manual transmission without clutch ?. To replicate the same Celto’s success, the Kia Sonnet arrives with a clutch-free manual transmission. This technology has been tested on two wheelers such as TVS Jive and Hero Streak in India and has been used for many cars in the international market. The gearbox, called the Intelligent Manual Transmission, will be available with the 1-liter engine. It also comes with a 48 watt miles hybrid system.

The global premiere of Sonnet Concept’s production model, which premiered at the New Delhi Auto Expo, is set to take place later this year. Unofficial reports say the vehicle will be launched later. Hyundai is the platform that forms the basis for the small SUV, the Venue, but the Kiandu has done everything possible to keep customers in doubt. Kia’s hand-crafted tiger nose grille and distinctive mesh pattern adorn the sonnet. The Sonata Kia features sleek headlights that combine LED and DLR instead of split headlamps.

The rear LED light bar connecting the tail lamps, side claddings and dual tone alloy wheels enhance the sporty look of the vehicle. The vehicle has a sporty interior just like the exterior.

The segment has several features including the first 10.25-inch touch screen infotainment system (cellos). The sonnet manufacturer may offer the 1.2-liter petrol, 1.0-liter turbo petrol and 1.5-liter diesel engine. The sonnet will also be released in manual and automatic variants.

The sonnet also comes with a large number of competitors, such as Bresa, Nexon, EcoSport and XUV300. The vehicle is expected to hit the market in August this year. Kia plans to release about 70000 units of sonnets in its first year. The small SUV is the most admired segment in India. The Sonata is the vehicle that Kia launches into the segment which includes Vitara Breza, Ford EcoSport, Hyundai Venue and Mahindra XUV300. 7 to 11.5 lakh.
Share
Facebook
Twitter
Pinterest
WhatsApp
Telegram