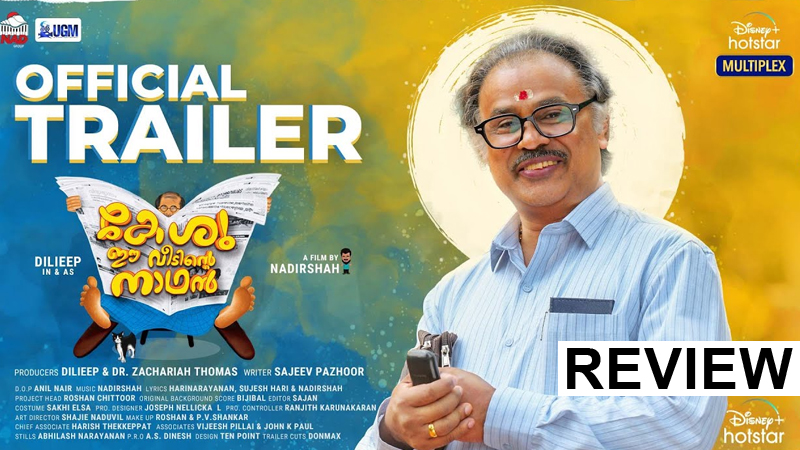 ‘Keshu Ee Veedinte Nadhan’, directed by Nadirsha, is a good film that combines the humor and celebration that one would expect from a Dileep film. The theme of the film is the caricature’s character of Keshu and the small problems in his life and his transformation through them. The movie, which can be watched with the family without any tension, has been released on the Disney Hotstar platform on 31st December. A film usually has a surprise for the audience during the first half or at the climax. But in Keshu Ee Veedinte Nadhan surprise elements happens right from the beginning. After that, the audience is brought to Keshu’s story environment. The center of that world itself is the 67-year-old Keshu, someone who is driven by essential greed and even more prejudice!

It may seem that Keshu is selfish on the outside but on the inside, there is love and care for the siblings. There are three sisters and their husbands who come to the family consisting of a mother, wife, and two children every day with every need. The first half of the movie gains momentum as it goes on introducing their lives and the character Keshu is about to win a lottery. The story then travels through the expected events. The story shifts to a sentimental track as Keshu is misunderstood and isolated in the story that takes advantage of the potential of slapstick comedy.

The performance of Dileep as the 67-year-old Keshu is the highlight of the film. Dileep has tried to bring the character to perfection even in body language and voice. Urvashi’s performance in the film is similar. You can also enjoy Urvashi’s skill in performing comedy scenes effortlessly in this movie. The Dileep-Urvashi combo is the main attraction of the film. Nazlin and Vaishnavi, who are act as the children, have fun moments with Urvashi.

The screenplay of the film is by Sajeev Pazhur. Keshu’s big family is portrayed by including the young stars along with the stars whom the Malayalees have seen and experienced. Kalabhavan Shajon, Jafar Idukki, Kottayam Nazir, Harishree Ashokan, Seema G Nair, Priyanka, Swasika Vijay, Harish Kanaran, and Ganapathy all come in their regular costumes. The songs composed by Nadirsha seem to fit the story context. Bijibal composed the background music for the film. Anil Nair has captured the world of Keshu beautifully on camera. Sajan is the editor of the film. Director Nadirsha will also be seen in a guest role in the film. The film is produced by Dileep and Dr. Zachariah Thomas and can be enjoyed without any tension.