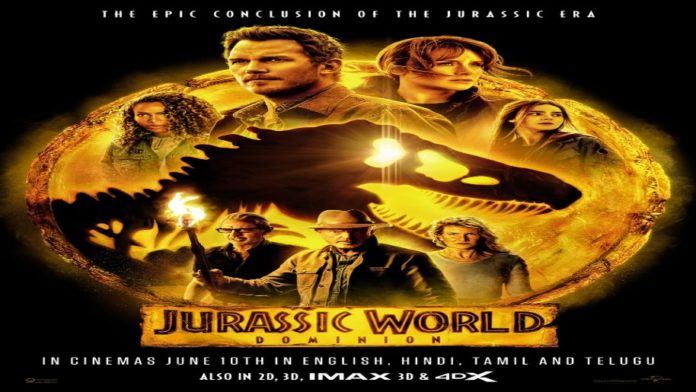 Advance booking for Jurassic World Dominion, the last film in the Jurassic World Series, begins in selected cities which will be in 3D , IMAX 3D , 4DX & 2D. The film will be released in English, Hindi, Tamil and Telugu on June 10.

The finale is on a double – sized canvas from the last two films.From the trailer of the film released earlier, it was clear that the film will be a visual feast for the audience.

Jurassic World Dominion will also see the return of Chris Pratt, Sam Neill as Dr. Alan Grant and Laura Dern as Dr. Ellie Sattler, along with Jeff Goldblum’s Dr. Ian Malcom. Making it grander, the movie touches upon the much spoken about argument – can dinosaurs and humans co-exists?

It promises to be a full house for the epic conclusion to the Jurrasic saga with bookings now open across 60 cities and 228 screens. These cities include Mumbai, Pune, Goa, Ahmedabad, Delhi, Surat, Indore, Hyderabad, Bangalore, Chennai, and many others.

The film is a sequel to the 2018 film Jurassic World Fallen Kingdom. The Fallen Kingdom ends where the artificially created dinosaurs escape to human habitation. Dominion tells what will happen next. PRO – A S Dinesh, Sabari