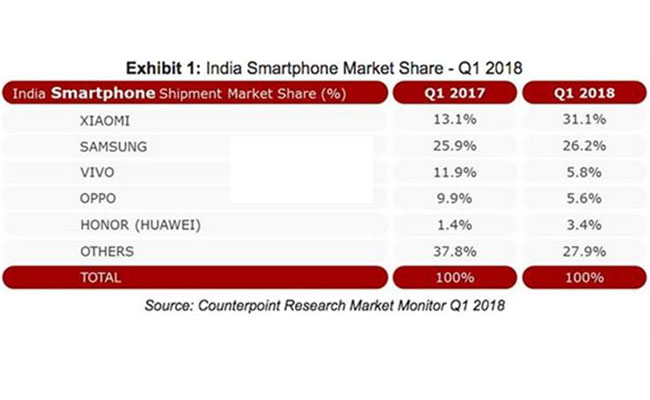 As the Q1 report of Indian Smartphone market in 2018 came out, it has presented an interesting data. While Chinese companies continued their dominance in the price sensitive Indian market, it was Xiaomi, which led the chart. Owning 31.1 percent of the total market share (as against 13.1 percent in Q1 2017), Xiaomi has bolstered its position as the leader in Indian smartphone market. Contrary to the popular perception, it was not at the cost of Samsung – once the unchallenged player in Indian smartphone market – which Xiaomi profited the most. As against a market share of 25.9 percent in Q1 2017, the Korean giant has bettered its position in Indian markets, when it comes to Q1 2018 – owning 26.2 percent.

The main reason, which triggered the growth of both the leaders, was the shabby performance form two Chinese models – Vivo and Oppo. From a combined market share of 21.8 percent in Q1 2017, their dominance in Indian market got shrunk to 11.4 percent, when it is Q1 2018.