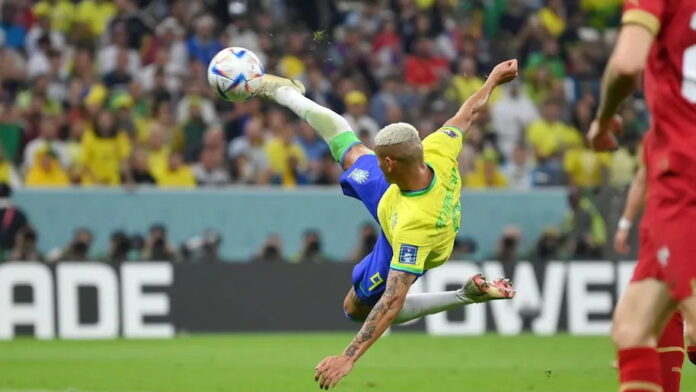 The five-time champions Brazil gave a wonderful start at the FIFA World Cup 2022 with a commanding 2-0 victory against Serbia at Lusail stadium, Qatar on Friday. Richarlison scored both the goals for Brazil in their opening Group G match.

Richarlison opened the scoring just after the hour mark, following in to net after a Vinicius Jr. shot had been saved. But he saved the best for the 73rd minute, when he scored with a stunning acrobatic scissor kick after controlling a Vinicius cross.

There had been fears the 25-year-old would not make the Brazil squad for the tournament after he came off with a calf injury playing for Spurs in a Premier League game against his former club Everton in mid-October.

As Richarlison attempted to control a cross from Vinicius, the ball popped up over his head and he leapt up in the air to volley home a bicycle kick and seal the win for Brazil.

Such was Brazil’s dominance that they made as many as 22 attempts on goal in the match with eight on target, while Serbia failed to hit the target in their five attempts. Brazil now jumped to the top of the group standings with the win.

Switzerland are second in the group after they beat Cameroon 1-0 and Serbia are bottom.