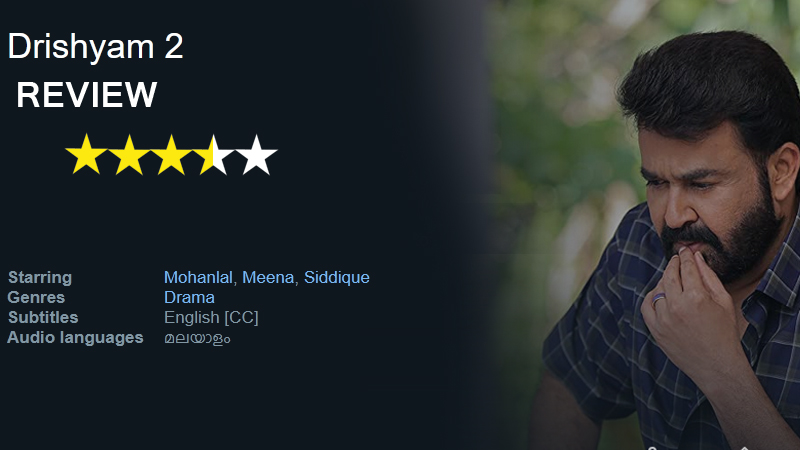 Drishyam 2 Review – Another Thriller from Jeethu Joseph: Indian movies have never properly explored the genre of horror. For them, a horror movie means a movie with a ghost. There are very few movies that create a sense of horror and put the audience into such situations. Maryada Ramanna was a Telugu film that successfully dealt with the subject of horror. This horror-comedy movie directed by SS Rajamouli was a surprise hit at the box office. Even though this movie was remade into several other Indian languages, none of them could recreate the sense of horror in the original version. Rather, they just mimicked the comedy elements from Maryada Ramanna.

Drishyam has a very perfect ending. In fact, we have not seen another movie with such a complete ending in the near past. The audience was satisfied to the core and hence, they could never think of a sequel to this film. When Drishyam 2 was announced, many felt that it was an unwanted move. Most people argued that this would tamper the reputation of the first installment and there are only financial motives behind the idea of making a sequel. The audience was not completely satisfied with the shooting spot stills and even with the teaser that released on the new year. But the trailer and a video song from the film which released a couple of days ago gave new hopes to the audience.

Drishyam had a very unique way of approaching the script. Even though the style of narration was new to the Indian audience, the pattern of the film is similar to almost any other Indian movie. That is, the film shows a middle-class family, their daily life, a crisis happening in their family, escalation of tension and towards the climax, the plot de-escalates and moves towards a happy ending. But have you ever tried relating this movie to your real life? Will you ever be able to sleep peacefully any day after? The feeling of being guilty will ever be washed away from you? The body of the victim is buried in the most sensitive area of that place – the police station. What if the place needs to be dug up for any wiring purposes? What if any high-profile person visits the police station and the before that, the whole police station needs to have a thermal scanning? This is a case that has “fooled” the entire police department. Do you think the police department would ever give up on this case? Leave everything, do you think the mother of the victim would never return to find out what has really happened to their only son? Of course, we have seen how egoistic a person Geeta Prabhakar is in the first part.

We need to find answers to many such questions. Maybe it is from these questions, Jeethu Joseph came up with the idea of Drishyam 2. Beyond answering all these questions, what Jeethu Joseph needs to address is a different issue – the emotional trauma of the characters in the film, especially of that of Rani and Anju, because they were the only people who were directly involved in the crime. Both George Kutty and Anu George can easily move on with their lives as either they have not to be involved in this crime or they are merely a witness to the crime. Drishyam 2, as mentioned by the director many times, is not a thriller film, but an emotional family drama. The primary task of the director is not to make Drishyam 2 as thrilling as the first installment, but not to shatter the characters of the film and present them as they are in the minds of the audience. This is where Drishyam 2 scores high. Drishyam 2 is a perfect installment to the series.

One of the best things the makers of the film have done is that they have marketed the film as it really is. The audience does not have a false conception regarding what the movie really is and hence, none of their judgments break. The audience loves a hero when he is smarter than they think. This is where Jeethu Joseph plays a brilliant move. We know how clever George Kutty is, but he breaks all our expectations regarding his cunningness. He is the backbone of this film. The contribution of every character, whether small or major, is what is film is all about. The characters from the first installment are nicely given a continuation to their original characterization. The only thing is that they have matured a little, almost by 7 years.

Drishyam 2 is a must-watch movie that has completely done justice to the first installment. You would fall in love with all the characters in this film, irrespective of whether they are positive or negative. That is how the director had shaped every one of them and allocated them screen space. This movie is perfection even in the technical sense. The cinematography, editing, songs, coloring, everything is up to the mark. Instead of saying that Drishyam 2 is a wonderful sequel to a masterpiece, we can just go on to say that this film is a masterpiece by itself.