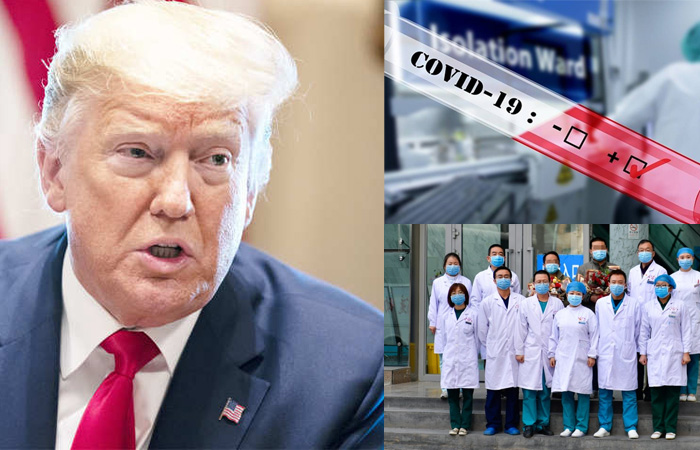 Covid patients cross over 4 lakh in US : Trump Loses Control as evidence Contradicts his Actions

US President Donald Trump is embarrassed to come out with criticism, including by experts against his position and political actions on the Washington Eye Corona. Trump repeatedly became angry at a news conference called Monday to explain matters. He did not even address questions about the inadequacy of government actions.

Trump’s reply was that the allegations were politically motivated when he noted that there was a shortage of essentials in hospitals across the country. Politics and science are at stake in the United States. Trump said there was no evidence that hydroxy chloroquine was effective in treating Covid. The country’s senior epidemiologist, Dr. Trump covered the mouth of Anthony Fauci at a news conference Sunday.

Trump said he could not wait for more research when thousands die. Trump has been worried about the country’s economy and the disintegration of the country and its failure to contain the spread of cowardice. In January, financial adviser Peter Navarro warned that unless the corrective measures were taken, tens of thousands of people would die in the United States.

Trump is unwilling to accept any position that his government is failing to resist. Pointing out the inadequacy of the corona inspection, Trump was blown away by the fact that ours is the federal government, and not to stand on street corners during the inspection. Senior scientists, researchers and health professionals have warned Trump about the potential risks caused by Covid.

Trump made the statement that despite many warnings, no one could predict the impact of the pestilence. Experts point out that the Trump administration faces serious challenges in the wake of allegations that the US government has failed in co-ordinating measures and that the country’s death toll is steadily rising. The United States is the country with the largest number of Covid casualties in the world. At 9.15 pm Indian time, there were 4,00,549 people living in the US. 21,711 people became ill and 12,857 lost their lives.