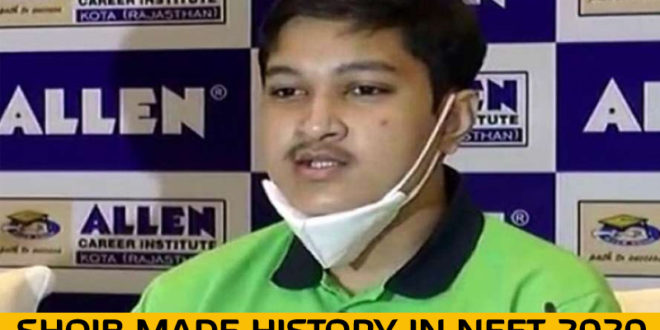 Shoaib Aftab, an 18 – year – old from Rourkela, Odisha, has made history by scoring 720 out of 720 in the All India Medical Entrance Examination. Shoaib’s dream is to complete his medical studies and become a cardiac surgeon.

Shoaib had joined the Career Institute in Kota, Rajasthan for coaching. After the lockdown was announced all over the country, all the classmates returned home but Shoaib was not ready. He continued to stay in the fort. I spent a lot of time studying at the lockdown. Shoaib got 100% marks as a result of that hard work.

‘I have not been to Odisha since 2018. Study for 10-12 hours a day. I want to serve those who are financially backward in the community. I want to inspire young people. ‘ Shoaib said he saw the media after the high-profile victory.

Shoaib lived in the fort with his mother and younger sister. Dad owns a real estate business. The family has decided to visit the Ajmer Dargah together. The National Testing Agency conducted the NEET exam on September 13 and October 14 amid the Kovid 19 crisis.

Education Minister Ramesh Pokhriyal said that this year’s examination was held amidst many crises. This is the first time that a single test has been conducted for admission to all medical colleges, including AIIMS. He thanked all the Chief Ministers for successfully conducting the examination and cooperating with the Center in complying with the Kovid norms. A total of 13,67,032 candidates appeared for the exam on September 13 and 290 on October 14. Results are available on the website ntaresults.nic.in.