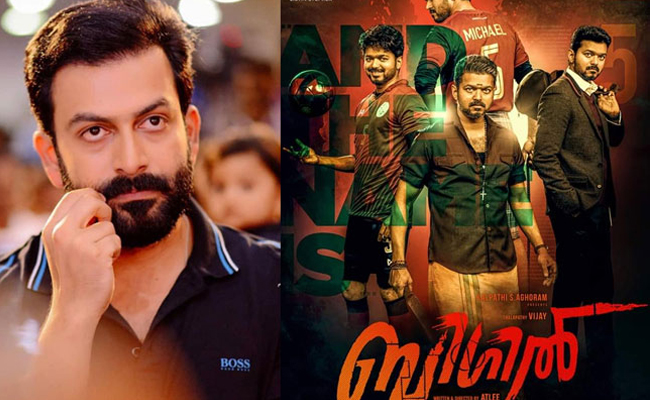 Dalapathy’s Big Budget movie  Prithviraj The film is distributed by Prithviraj Productions and Licin Stephen’s Magic Frames. The distribution rights of the film have been sold for no amount of money yet.
However, it is yet to be announced how many theaters will release the movie. While there is a stipulation that foreign-language films should be released in a maximum of 125 locations, this would also impede the release of Bigil. Vijay has a huge fan following in Kerala. Vijay films are getting the same encouragement as superstars. It remains to be seen whether or not this restriction will be imposed on Bigil.

Vijay starrer sports thriller film ‘Bigil’ has been in the spotlight since its announcement. This is the first time Atlee and Vijay will be seen together after ‘Theri’ and ‘Mersal’. Vijay will play the role of coach of the women’s soccer team Atlee this year, which will give her character roles beyond the usual protective roles.

Nayanthara is the heroine of the movie. Music is composed by AR Rahman. Vijay’s two getups are in the picture. The film also stars Kathir, Jackie Shroff, Vivek, Daniel Balaji, Yogi Babu and Varsha Bolamma. The film will release on October 27.